Tencel vs bamboo, linen, and organic cotton: How does it compare to other sustainable materials?

In the last two decades, the global production of fibers has exploded from 58 million tons to 109 million tons annually, and it is predicted to grow by another 34% in the next decade alone. With the climate crisis already changing weather patterns and living situations around the world, the fashion industry is under intense scrutiny for the environmental impact of its textile products. Accusations of opaque supply chains and greenwashing campaigns abound, such as Boohoo’s recent controversial collaboration with Kourtney Kardashian.

At the same time, consumers are becoming more conscious of the impacts of the products they buy, and new, disruptive fashion brands, such as Allbirds, Bolt Threads, and Pangaia, are pushing larger brands and the industry as a whole towards more sustainable ways of operating.

This has led many fashion brands to ramp up the search for cost-effective, eco-friendly fibers. In this article, we’ll compare Tencel, a popular eco-friendly fiber, to a few other popular sustainable fibers — bamboo, linen, and organic cotton — and see how its carbon footprint, water consumption, cost, and availability compares.

Enter Tencel, a soft rayon material also known as lyocell. It comes from cellulose, and was first produced 40 years ago by Lenzing, an Austrian textile production company. With a strong structure and silky texture, Tencel fibers are recyclable and biodegradable. It has antimicrobial properties and retains color well. And compared to similar man-made cellulosic fibers, Tencel has a significantly lower environmental impact.

The creators of Tencel claim that the cellulose used in their product is harvested sustainably from the Programme for the Endorsement of Forest Certification and Forest Stewardship Council tree plantations, which require that forests are managed and harvested responsibly, and the products created from them are fully traceable. With the rise in demand for similar fabrics, like viscose, this is a welcome change, as many competing fibers are typically harvested unsustainably and contribute to deforestation. The company also says that they have designed their production process so that 80% of the process is done by hand, while 20% is done through machinery, keeping energy costs and consumption low.

But how does Tencel stack up against other popular textiles? Let’s take a look.

Both Tencel and bamboo are rayon fabrics made from cellulose. Bamboo is produced from the tall, stalky grass through a viscose method, yielding a very soft fabric. But how will the newer Tencel stack up against the tried-and-tested bamboo?

Carbon footprint. Lenzing, the company that created Tencel, prides itself on production transparency, and is dedicated to properly recycling chemicals and working toward other sustainable best practices. Although bamboo is a high-yield, easy to grow resource, the manufacturing process is not as closely inspected and optimized as Tencel’s.

Water consumption. While Tencel’s closed-loop fabric production system stores and reuses 99.5% of water and solvent used in the process, the Eucalyptus trees needed for the pulp in the product are water-intensive and need lots of upkeep. Similarly, bamboo requires lots of water to flourish, and the fiber production is not as regulated as that of Tencel.

Cost. Bamboo is the cheaper of the two fabrics in terms of production, simply because the technological advancements and development needed to create Tencel are costly.

Availability. Lenzig’s main production facility is in Austria, but they are developing production sites in China, Indonesia and the United States. The current limited production sites means that it can be difficult to find Tencel. Bamboo is also hard to find, since most of it is grown in China and Taiwan, which makes localized production difficult.

Though bamboo doesn’t require much intervention from pesticides to grow, Lenzing guarantees that its fabric is made from sustainably harvested trees and has a closed-loop production process. Tencel and bamboo are similar fabrics with similar growth conditions and production processes, although it’s worth keeping in mind that Tencel’s operating company is likely to be more committed to rigorous sustainability standards than an average bamboo production plant. If you’re sourcing bamboo, do your due diligence and evaluate suppliers carefully, like Green Story customer BAM does.

Tencel is often the go-to material for fashion designers looking to lean into eco-fabrics, and has been on the market for about 40 years. Linen, however, has been around for centuries. Made from the flax plant, linen is one of the oldest materials and is a great choice for warmer climates with its breathability and light-weight feel. Let’s see how they fare against each other.

Carbon footprint. Created with sustainability in mind, Tencel wins out over linen in terms of CO2 emissions. Tencel production facilities are designed to create fewer CO2 emissions and use less energy. Linen, while generally more earth-friendly than other materials on the market, has an intensive production process that yields more carbon emissions than its competitor.

Water consumption Linen is made from flax plants, which require shockingly little water and maintenance than the pulpy products used to create Tencel. Despite having a closed-loop production system that recaptures and uses 99.5% of water and solvents during production, linen requires about 20% less water than Tencel.

Cost. The hefty price tag for linen lies in its manual labor costs. The fabric requires a great deal of care since it can break apart quicker than other fibers when woven, making it more of a luxury fiber. But despite the luxury, the cost to create Tencel makes it the more expensive buy.

Availability. Tencel is still coming up in the fiber market, having been available for just four decades, whereas some records suggest that linen has been on the scene since 30,000 BC. Many brands swing toward linen for its ready availability, but with more production plants in the works for Lenzig, Tencel could soon be easier to access.

Although Tencel ranks high on sustainability, linen uses no chemicals in the yarn production stage. Keep in mind the fact that linen is so widely harvested, which means that its production practices are staggered, making the impact of its production harder to track than the rigorously-reviewed Tencel. Comparatively, Tencel is softer and more versatile than linen, more durable, and less prone to wrinkles. Linen is likely easier to source and a little cheaper, but both fabrics offer an eco-friendly alternative for apparel supply chains.

Organic cotton is a natural, biodegradable fabric and the ideal replacement for its more common counterpart, cotton. Tencel is a soft rayon fabric created from cellulose. But how do the two compare?

Carbon footprint. With a closed-loop and highly sustainable production process, Tencel has managed to lower its CO2 emissions to a large degree in comparison to other fibers. While organic cotton by name implies there are no toxic chemicals used in farming, the sheer amount of energy used to make and gin the fabric make it somewhat energy-intensive.

Water consumption. Tencel production stores and reuses 99.5% of water and solvents, though the Eucalyptus tree pulp used to create it takes a decent amount of water and upkeep. Organic cotton, in contrast, uses 85% less water than normal cotton, but it’s not enough to outweigh Tencel’s closed-loop production process.

Cost.  Because of the technology used to create Tencel, as well as its limited production, organic cotton comes out on top in an economical perspective. Organic cotton is more easily farmed and widely harvested, and many areas of India have switched from tradition to organic farming practices.

Availability. Many cottons are widely available globally, with a particularly concentrated market in India. Tencel is currently only produced in Lenzig’s facility in Austria. Organic cotton, however, is being sold faster than it is being produced.

While both fibers are grown free of pesticides and are vastly versatile, the production of Tencel is more controlled and carefully thought out. While the quality of organic cotton can vary, Tencel is controlled at every stage, allowing for a more quality product. It’s also the softer, stronger, more durable fiber with better color retention.

Organic cotton is more widely available and more cost effective, but its harvesting and production processes vary widely around the world, which has led to a lack of governing sustainability practices and makes it difficult to find legitimately organic cotton. That said, it’s definitely possible — Pact, for example, is well-known for its reliance on high-quality organic cotton Both materials have their environmental benefits, so it’s worth weighing up the individual features of each fiber before determining what’s best for your supply chain.

If you’re an apparel brand looking for a stronger, greener way forward, Tencel is a fantastic sustainable option. It edges out most of its competing fabrics in all categories, producing fewer carbon emissions, using less water, and focusing on long-term sustainability and responsible harvesting practices. It’s soft, durable, recyclable, and biodegradable, making it a dependable and wise choice for consumers.

For more practical examples of how fashion brands are integrating sustainable materials into their supply chains, download our free Green Fabric Guide. This helpful guide to eco-friendly fabrics covers important considerations for material sourcing in the apparel industry and evaluates the environmental impact of popular fibers, including linen, Tencel, hemp, bamboo, organic cotton, and recycled cotton and polyester. 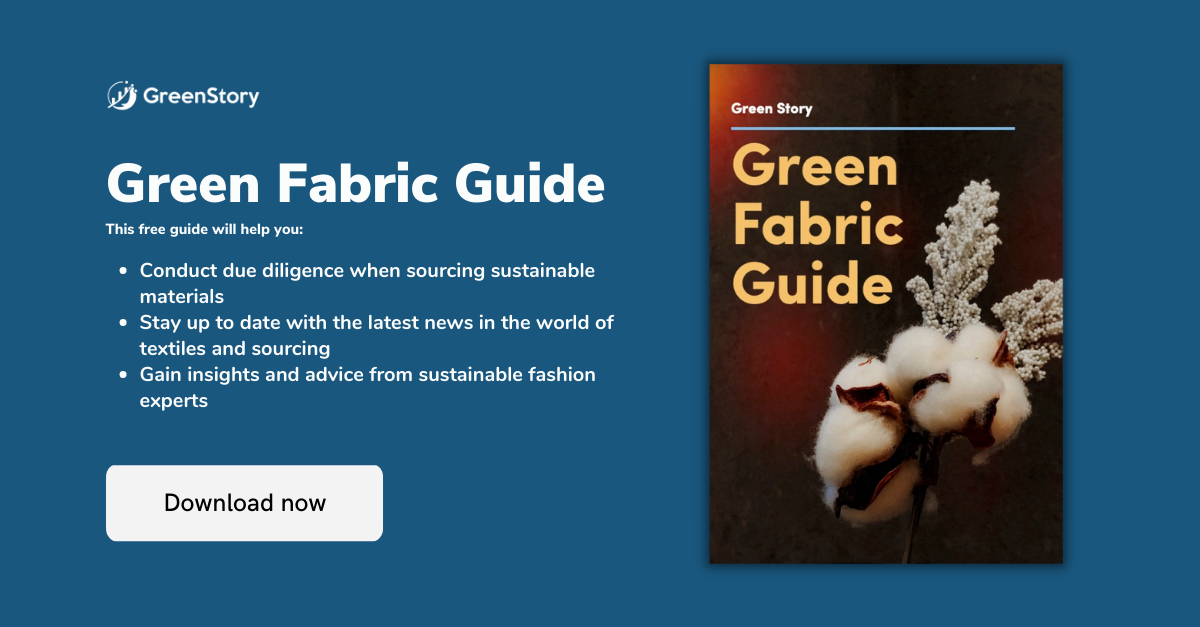 Amelia Zimmerman is an ESG and sustainability writer. She lives in Toronto with her puppy and her partner, and she is passionate about using storytelling techniques to help people understand and act on climate change.