Mushrooms: controversial topic. They’re just one of those foods – people either love them or hate them. This week on #FantasticFibres we are looking into how mushrooms are also causing a stir in the ecofashion world with some pretty bold claims. Mushroom fibre-based garments are allegedly everything from carbon negative to antimicrobial. And it’s got major players like luxury fashion giant Stella McCartney interested.

Last week, our #FantasticFibre of choice was pineapple leather. Getting the facts on mushroom fibre is a little trickier. First of all, it’s not unified under one company and material like Piñatex. There are several producers of mushroom fibres for apparel, which makes information and features vary. Second, the flip side of focusing on cutting edge fibres is that they are super new and not as tried-and-tested as ones that have been around for a lot longer. We are excited to fill you in on what we do know!

When we say “mushroom fibre” we are talking about a few different things, based on the variety of operations making fungus-based products. Most manufacturers right now seem to be creating fibre one of two ways. Either they are using a huge-growing species called Phellinus ellipsoideus, or the mycelium (root-like system) of reishi and/or pearl oyster mushrooms. There are a few major players in the world of mushroom manufacturing: Mycoworks, Mogu, Mylo by Bolt Threads, which all seem to use mycelium as their base, and MuSkin which uses Phellinus ellipsoideus.

OK, but how do these mushrooms become clothing? The mycelia are given various agricultural byproducts to eat, and then are placed in molds to control their growth. Once they have reached the desired form, they are baked in a kiln to kill the fungi and set it into workable fibre. According to manufacturers, this results in a super versatile material. It can be hard or soft, flexible or rigid, and dyed naturally, all depending on easy changes in food and growing conditions to build in features from the get-go. So far, mushroom fibre has been used predominantly as a  for decor (mushroom lampshades, anyone?) or as a leather alternative because it easily mimics its colour and texture. But it looks like the possibilities are far greater.

The list of perks of mushroom fibre clothing is long. Current mycelium-based versions are allegedly 100% biodegradable, plastic-free, and antimicrobial, just in case wearing fungus was sketching you out a little bit. It’s also water-, fire-, and abrasion-resistant, and breathable because it’s all-natural. On the environmental front, using varied agricultural byproducts like discarded cornhusks or sawdust means it reduces agricultural waste instead of letting it be tossed out or burned. Mycoworks, one of the major producers, says their mushroom fibre is even carbon negative, and they have achieved a closed-loop production cycle. As a vegan leather alternative, it uses a fraction of the cost, resources, energy of cowhide, which is notorious for its resource consumption and polluting nature. Basically, mushroom fibre for clothing is packed with potential to change fashion. 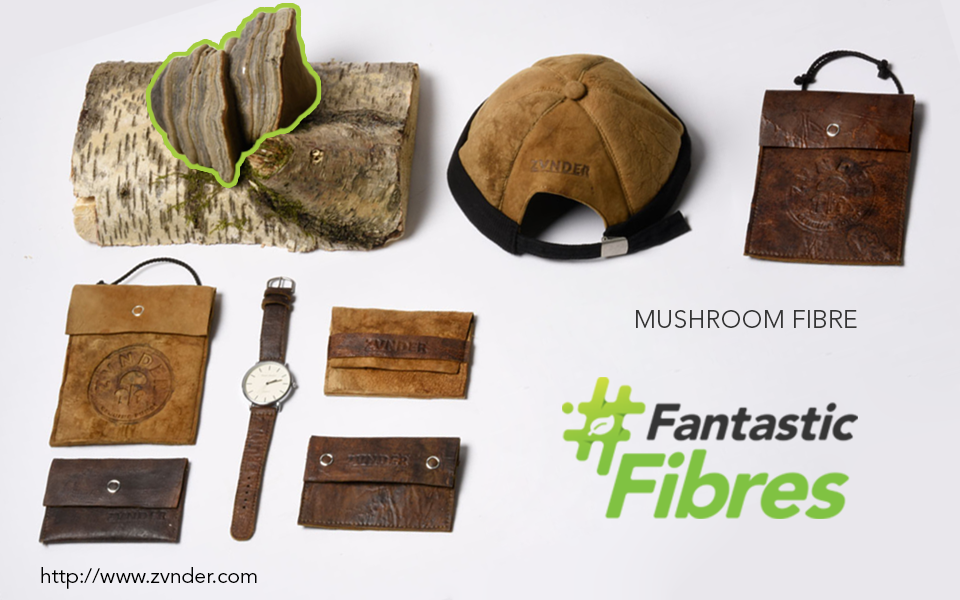 Well, like we mentioned earlier, mushroom fibre is cutting edge innovation. Meaning, we don’t have any lifecycle analysis data to confirm the validity or uniformity of these impacts. And the very real potential flip side of 100% biodegradable fibre is that it might decompose within a few years – it hasn’t been around long enough for us to know for sure. Another potential issue is that mycelium grows slowly, and it can take 3 to 4 weeks for a few dozen yards of fibre to be produced. However, that is still much faster than how long it takes to raise a cow for its hide.

So far, mycelium fibre products have been strong enough to replace bricks as building material, or delicate enough for decor, and flexible enough to act as watch straps. Mushroom fibre could be the vegan, carbon negative, waste-reducing solution to many of fashion’s sins, or it might decompose in a couple years. we are excited to find out.